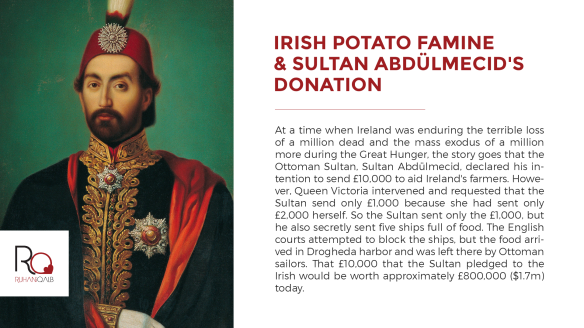 At a time when Ireland was enduring the terrible loss of a million dead and the mass exodus of a million more during the Great Hunger, the story goes that the Ottoman Sultan, Sultan Abdülmecid, declared his intention to send £10,000 to aid Ireland’s farmers. However, Queen Victoria intervened and requested that the Sultan send only £1,000 because she had sent only £2,000 herself. So the Sultan sent only the £1,000, but he also secretly sent five ships full of food. The English courts attempted to block the ships, but the food arrived in Drogheda harbor and was left there by Ottoman sailors. That £10,000 that the Sultan pledged to the Irish would be worth approximately £800,000 ($1.7m) today.