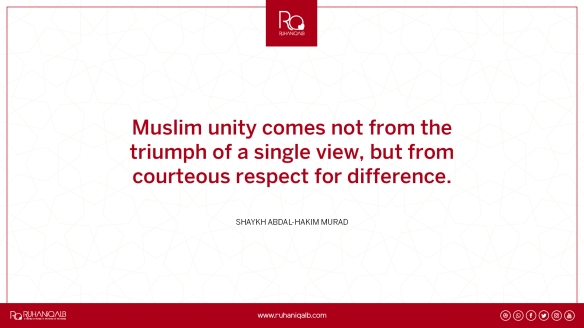 Muslim unity comes not from the triumph of a single view, but from courteous respect for difference. In our extreme times this must mean an insistence on husn al-zann – giving other Muslims the benefit of the doubt.

How easy and seductive is the path of deflecting the confusion by pretending that one’s own views alone are right and faithful! Most of the Muslim world’s misfortunes stem from this. Iraq was wounded by the 2003 invasion, but the damage done by subsequent Muslim mutual intolerance was far worse, and turned an opportunity into a tragedy. Intolerance between various Muslim opinions is now dividing the opposition in Syria; in Pakistan, the mullahs are increasingly unpopular because of their bitter and sometimes murderous infighting. Where is this leading us?

Aware of the weakness of the masses and the dangers of division, the scholars have opposed narrowness for a very long time. Imam Birgivi, who lived at the outset of the Kadi-zade controversy, wrote this in his Tariqa Muhammadiyya: ‘in our age it is not possible, not possible, to hold to the more precautionary view (al-ahwat) in giving fatwa’. He wrote ‘Not Possible’ twice! Ours is a time in which we must be rigorous with ourselves, and strive to know what is right, while being endlessly forgiving with other Muslims, for as long as there is some possible ambiguity or excuse which could be made.

One of my teachers, Shaykh Abdul Wadod Shalabi (d.2008), was fearless in calling for justice in Egypt. As well as becoming Deputy Shaykh al-Azhar he was imprisoned for five years by the regime. Once he came to London for a conference. I went with him to a newsagent where he needed to buy something. He looked around, and saw the sights which make us flinch but which we are used to: the adult magazines, the bottles of Bacardi, the scratch cards. Behind the till sat a depressed-looking Asian woman.

The shaykh was a man with firm views about what was right. He had gone to prison for them! But his response to this scene startled me. He said nothing about the horrors which were all around. Instead he kindly talked to the woman and asked what her name was. It sounded like a Muslim name, and he gently conversed with her, affirming her identity; and then he left. So simple an encounter, but so effective! Where scowling and blaming would have driven her further into her shell, he gave her a moment of peace and a happy reminder that she was Muslim. For her, briefly, the sun came out. If there was a door for her back to religion, he had opened it for her, with that compassionate smile.

Ibn Rushd al-Jadd, the teacher of al-Qadi Iyad. comments that a time of fitna will come when we should avoid any reference to the faults of others, because those comments will either be ignored or will be counterproductive, increasing the fitna. He adds that given the corruption of his age, that time might already have arrived (wa ma ashbaha zamanana bi-hadha’l-zaman). He was writing nine hundred years ago!

It was by a mercy from Allah that you were gentle with them. Had you been fierce and hard of heart, they would have scattered from round about you. (3:159)

Looking at our discussion groups, how many would conclude that Muslims have clearly found the truth, being happy in their agreement on essential matters, and courteous in allowing for difference in all else? The principles of fellowship, of mutual love and of da’wa seem to be low on our list of priorities, whatever we might think. Towards the end-times, ‘everyone with an opinion will be delighted with his opinion’ (hadith in Abu Daud). The reference clearly is to the ego’s attachment to a particular point of view.

May Allah turn in forgiveness towards this umma, best of all ummas, give us sound knowledge of usul as well as furu’, heal our hearts, bring us together, and teach us wisdom in this difficult time. Amin!

Source: On the Boundaries of Da’wa by Shaykh Abdal-Hakim Murad